For the first time in several years I am playing in an RPG campaign. I almost always am the Game Master, so it has made for a nice change of pace. It is always good to gain some insight into the game from the other side of the screen. Anyway, one of my fellow players is running a Tabaxi – a cat-person. I’m not big on furry-style characters, but he has done a nice job with his character. The problem was we did not have an appropriate miniature. Then I remembered I had some old Alkemy (an OOP French fantasy skirmish game) figures that might work. I painted one up and we will see if he wants to use it. 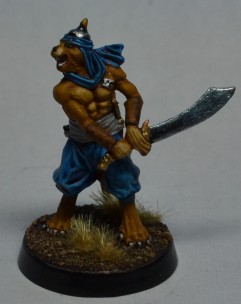 I am running the Bruckburg campaign this afternoon – I will post a campaign report soon.